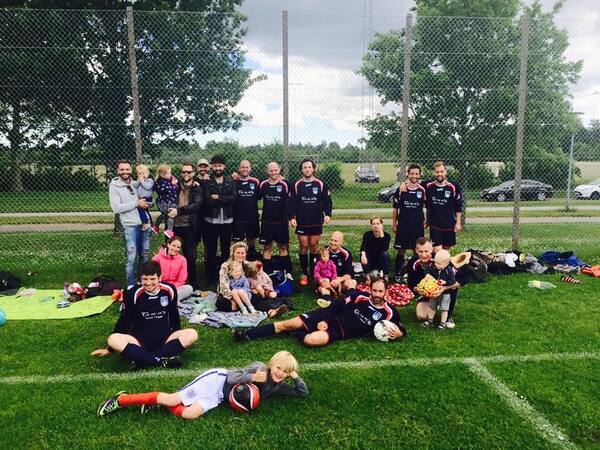 AOIF suffered a second half collapse after a tactical change up on Wednesday evening, at home to Baunehøj FC. Heading into the half-time break 2-1 down with a beautiful shin pad volley from returning midfielder Lars Mikkelsen, nobody could have predicted the onslaught ahead.

The game finished in a 9-2 defeat, AOIF's second goal comming from Tommy "tactical" Rasmussen, who made a sharp exit upon the full time whistle. One assist from Ross Bissland, who shared the M.O.M award with Tac Tommy and Lars Mikkelsen.

AOIF have their final game of the season next Thu...

Two games in three days started with a defeat for AOIF yesterday. With regular players missing, Søren Tiedemann, Thomas Wade and Ulf Rating (adding German as yet another nationality to our ranks) stepped up to crown fine debuts for the club.

Leading 1-0 at half-time, the lads looked to be in full control. Things quickly changed however early in the second half and AOIF struggled to recover once behind, finally losing the match 4-2.

Aarhus Oldboys International football had reasons to celebrate when taking to the field yesterday to get their 2019 campaign underway. The clubs 4th year birthday, a brand spanking new kit (thanks to Tir Na Nog, Aarhus) and a fine away win.

With a 4-1 win, it was the self proclaimed "White Pogba" Lewis Fisher who stole the show, with a man of the match performance, plus 2 goals. Wesley Bolger opened the scoring with a fabulous strike from outside the area, his 3rd goal in 9 games for the club. Last seasons Golden Boot winner Rob Thomas opened his account with one goal and an ...

AOIF suffered their first defeat of the current league campaign, losing 3-2 in an away defeat to Harlev IK on Monday night. The match proved to be a physical encounter, Lewis Fisher again spending some quality time on the sideline after being shown another yellow card.


Depleted by injuries, the lads battled through the game and were left to rue the many missed chances towards the end of the match.

Rob Thomas provided a Man of the Match performance for the 4th time this season, scoring both goals. Wesley Bolger proving to be a valuable play-maker at this stage of ...

Lewis Fisher returned to the side for Wednesday evenings 3-2 home win against Stilling IF. The Peter Crouch-esque midfielders contribution included 1 goal, 1 assist and a man of the match performance. Wesley Bolger, who was also in the close running for man of the match, added his second assist in 3 games.

A return to the team for Dawid Pacak who finished off Stilling IF in style.

AOIF now stand top of the league and 3 points clear, with a top of the table clash this Monday against Harlev IK away.